The other night, Sabrina the Teenage Witch was on tv and there was a scene where Sabrina was in her room talking on the phone to her boyfriend. My 10 year old daughter, with puzzled look on her face said, "What is that thing she's talking on?" 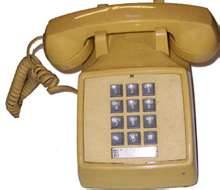 I turned to look at the tv expecting some strange contraption and there is was: an old school 1980's phone.

I said, "That's a telephone. That's what they used to look like."

She said, still puzzled, "Did they take those to school with them?"

"No," I said. "People used to go around with no phone on them at all. If you wanted to talk to someone on the phone, you called their house."

"What if they weren't home?" she asked.

"Then you didn't talk to them on the phone," I said.

Later I retold this to some friends of mine and we got a good chuckle, imagining a backpack with the base tucked inside and the handset with curled up cord coming out through the unzipped top of the pack.

Ah, the world as our kids know it.
Posted by Amy Willoughby Burle at 5:24 PM