W is for Waiting for the End 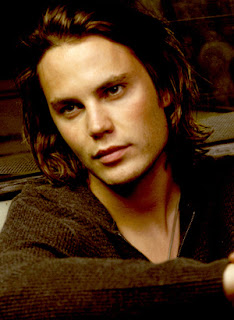 (Excerpt from The Lemonade Year a finished novel seeking representation. Cricket it a resident at the nursing home where Oliver works and where Nina's (the protagonist) father recently past away. This is also where Nina and Oliver met. This scene takes place in the house Oliver lives in.)

(The photo is of actor, Taylor Kitsch--whom I imagine would make an nice Oliver in the movie version of this book.)


“This makes you uneasy, doesn’t it?” Oliver says.


“Us,” he continues, looking at me with unsettling focus. “Me.”


“So how about it?” Oliver asks. “I think Nate would approve.”


Hearing him refer to Dad as Nate in the present tense reminds me that Dad is gone. It feels like hands slipped suddenly around my heart squeezing tight like trying to keep it from beating, but it beats instead.


“What are you afraid of?” Oliver asks.


Everything. I need to change the subject so I turn the question of family back to him.


“No,” Oliver says, turning back to the keys and picking out a tune. “They all live in Tennessee.”


“School,” he says, his back to me, repeating the same set of notes, having found the sequence he seemed to be looking for. “That math degree.”


I nod even though he can’t see. I watch him from the perspective of walking away—his back to me and his thoughts elsewhere. His shoulders and arms move, keeping up with his hands as they slide across the keys. I don’t recognize what he plays, but the melancholy of it hurts my throat.


“Had a job I didn’t want to give up at the time,” he says over his playing and then he reaches up from the keys and straightens a picture on the piano that I’ve never taken the time to look at closely.


“I thought you didn’t like the math jobs,” I say.


“You stayed to work with him,” I say letting him know that I understand.


“Couldn’t bring myself to leave,” Oliver says and plays a few more notes in the sequence. “Especially not once he got bad and I moved in with him.”


I look around at the house and then it strikes me why this place seems so out of the ordinary for a young man in his late twenties.


Oliver nods, still facing away from me.


“You stay here still to take care of the house?” I ask, although there’s no question.


“It’s a nice arrangement,” Oliver says, his voice growing distant. “While it lasts I guess.”


I get up and go over to the piano. He must feel my approach because he moves over and I sit beside him. He stops playing and looks forward. I follow his line of sight to the photo on the piano. It’s a picture of Oliver and Cricket here in this living room. It is obvious that the Cricket in this photo is in an earlier stage of his decline than the one in the nursing home. Oliver looks a bit younger, his hair is shorter.


“Mr. Cole?” I question and answer myself at the same time.


Oliver nods. He pecks out a couple of sad notes and then just lets his hands rest, unmoving on the keys.


“It must be hard to watch him worsen,” I say, speaking the words I’m sure Oliver wants to say but can’t.


“It’s not advisable to get attached,” he says.


This is true of all the attachments we form. But what would we do without them?


“It’s worth the risk, though, isn’t it,” Oliver says, his fingers resting on whatever notes come next.


He resumes playing. I see that his mouth tightens and his lips press and release against the emotion they try to conceal. One tear drops suddenly from his eyes onto his hand as it moves along the keys. I lift that hand in the midst of its music and kiss the salty spot on his skin.


“Thank you,” he whispers.
Posted by Amy Willoughby Burle at 2:15 PM

That was beautiful, the picture and the prose *wipes tears*